Neither global nor local: Heterogeneous connectivity in spatial network structures of world migration 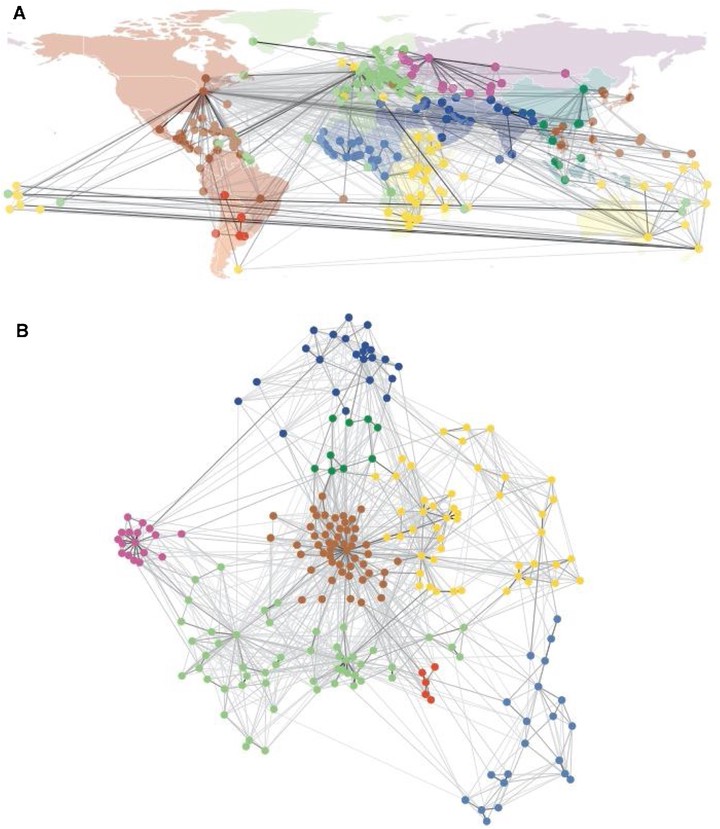 For a long time, geographic regions were considered the dominant spatial arbiter of international migra- tion of people. However, since the late 1970s, many scholars have argued that movements reach beyond contiguous regions to connect distant, dispersed, and previously disconnected countries across the globe. The precise structure of world migration, however, remains an open question. We apply network analysis that incorporates spatial information to international migration-stock data to examine what multilateral structures of world migration have emerged from the interplay of regional concentration (local cohesion) and global interconnectedness (global cohesion) for the period 1960–2000. In the world migration net- work (WMN), nodes represent countries located in geographic space, and edges represent migrants from an origin country who live in a destination country during each decade. We characterize the large-scale structure and evolution of the WMN by algorithmically detecting international migration communities (i.e., sets of countries that are densely connected via migration) using a generalized modularity function for spatial, temporal, and directed networks. Our findings for the whole network suggest that move- ments in the WMN deviate significantly from the regional boundaries of the world and that international migration communities have become globally interconnected over time. However, we observe a strong variability in the distribution of strengths, neighborhood overlaps, and lengths of migration edges in the WMN. This manifests as three types of communities: global, local, and glocal. We find that long-distance movements in global communities bridge multiple non-contiguous countries, whereas local (and, to a lesser extent, glocal) communities remain trapped in contiguous geographic regions (or neighboring regions) for almost the whole period, contributing to a spatially fragmented WMN. Our findings demon- strate that world migration is neither regionally concentrated nor globally interconnected, but instead exhibits a heterogeneous connectivity pattern that channels unequal migration opportunities across the world.